For those who don't know, I was made redundant last week.

I was out with friends on Friday evening any way, and ended up celebrating a little more than I had planned. The result was that my legend of a sister ended up looking after S for most of Saturday while I slept off my celebrations.

On Saturday evening I was feeling bad about palming S off on my sister for most of the day. I knew she'd had a fun time with her auntie; she always does. But I felt it was important that we should spend some quality time together, just the two of us. So I had a rummage around on Pinterest and came up with some fun ideas.

After lunch yesterday, I got out the activity table. One side of it is still filled with rice from the last time we used it; the other side has some balls from the ball pool hiding in it, so I sprayed some of that mouldable soap on top of them.

S enjoyed playing with this, but to be honest the part she enjoyed most was the sound the rice made as she dropped it on the floor!
We soon moved onto the cloud dough I'd stealthily made while she was napping: 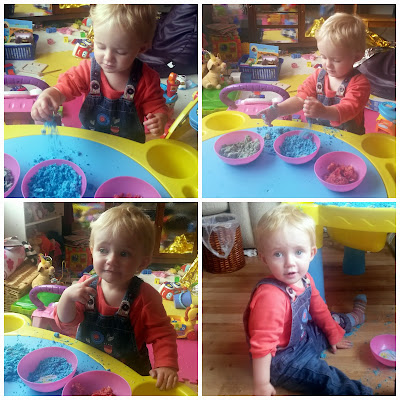 For reasons known only to S, she wasn't at all interested in the red dough, and barely touched the green. The blue was a massive hit though; she even tasted it (surprise; she tastes everything!) It didn't taste so good though, so she played with it on the floor instead.

Next we got out the blue peppermint spaghetti I'd made. I was pretty excited about this one, purely because it smelled so good, and looked so great. Also I'd left it in a colander while we ate lunch, and it had sort of fused together into a lump... 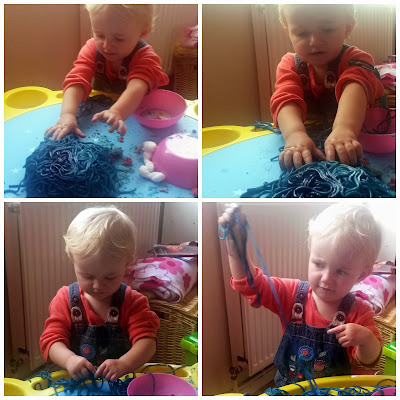 She had way more fun than I thought she would with this; she enjoyed pulling it apart and playing with the individual strands, but also just holding big handfuls of it! She also enjoyed throwing it on the floor. I realised at this point I probably should have removed her socks. And probably the dungarees too. And the shirt. And I definitely should have put a mat on the floor under the table! 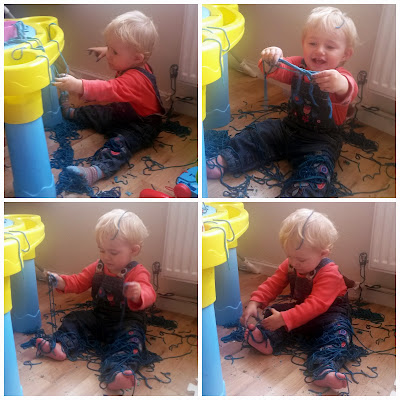 Eventually I took S's socks off, and seeing how much more fun she had feeling the spaghetti on her toes made me think next time I'll just stand her in a tub of the stuff or something. She giggled so much!

But look at the state of my floor in those photos! And what you can't see from this is the spaghetti splattered up against the wall and on the radiator! Next time we do this, I'm doing it with a mat on the floor, in the middle of the room!

We finished our session of by putting the bowls from the cloud dough on S's head and giggling. 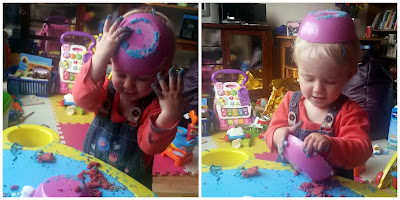 Shortly after this, we went upstairs to the bathroom and S had a lovely, long, splashy shower. Then I got her dressed and put a dvd on for her upstairs while I came back downstairs to clear up the mess!

We had such a fantastic time playing with the spaghetti and the cloud dough, and it cost hardly anything. I'm determined we will do this more often from now on... and I'm sure I have a big tub somewhere we can use for her to stand on squishy things in!

Now I'm off to trawl through Pinterest to get more fun ideas! If you have any suggestions please do leave a comment!