I resent paying over the odds for Christmas tree decorations that are crap any way and are likely to fall apart before it's time to take the tree down. Plus, I'm not exactly rolling in money these days. So I thought I'd have a go at making tree decorations this year.

Turns out, it's the easiest thing in the world to do - so I thought I'd share that with you!

The first batch I made were just normal salt dough, and I painted them once they had dried out - but then the lazy fairy inside of my head woke up and asked, why not just colour the dough as you're making it? And so I did... 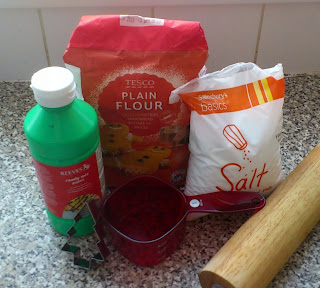 The basic recipe for salt dough is one part salt to two parts flour, and roughly one part water (you just mix in enough for it to become dough). I substituted green poster paint for most of my water. 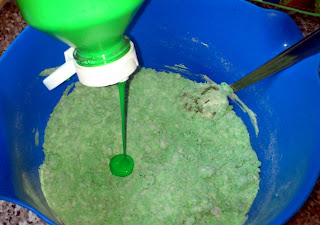 I used a spoon to mix it, until it was more dough-like, because I'm chicken and didn't want my hands to look like the Incredible Hulk. 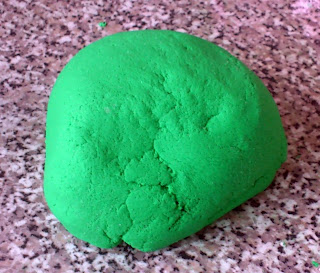 Once the dough is formed, it looks like... dough.
Don't be tempted to eat it though; even if you've used water instead of paint, it's made with so much salt it will make you vomit.

You need to knead the dough (see what I did there?) for a good five minutes. The more you knead it, the smoother the dough will be, and therefore easier to work with - and the nicer your decorations will be!

See the little cracks in the dough there? If they're still there when you roll it out, the dough is too dry and your decorations will not be suitably fabulous.
To resolve this, roll the dough back into a ball, sprinkle a little warm water on it, and knead some more. Think about someone who has really annoyed you. And your bingo wings. This is good for bingo wings. 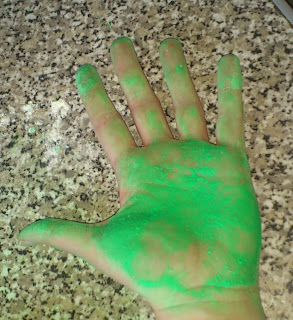 Even with being chicken about getting green hands, my hands are still green. Who knew that kneading green dough would make my hands green. The salt from the dough also makes your hands very dry and rough, which is just lovely. The good news is that because it's poster paint, the colour usually just washes off first go. But just in case, don't do this the day before a job interview or anything like that. Allow for the fact I may be wrong, or your poster paint may be different to mine. It happens. 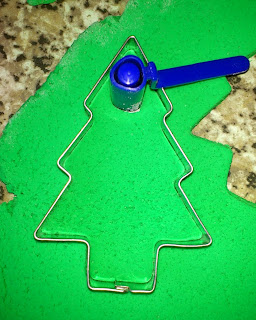 Once you've kneaded the heck out of your dough, you can roll it out and cut out your decorations.
This time I did Christmas trees - hence the green - but you can use whatever shapes you have to hand.

NB. the blue thing in the picture is a pen lid, which I have cleverly adapted to be used as a hole-cutter-outer. It is better to cut out a hole for ribbon to go through afterwards, than to try and poke it with a knife or similar. Also I have found that it's better to do this while the original shape cutter is still around your dough - this stops the pen lid from pushing the dough out and ruining the shape of your tree.

Incidentally, you don't have to use a pen lid. When I made star shapes, I used a smaller star cutter for the hole. The world is your oyster; choose whatever you want to make a hole in your decorations. 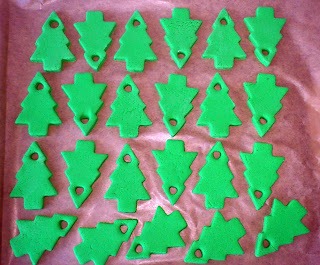 Once you've cut your decorations out, lay them on a baking tray.
I line my tray with greaseproof paper, because I am lazy and don't like having to wash baking trays - but it's probably a good idea to do that any way.
Make sure you marvel at how awesome your little assembly line of identical trees looks. Don't these look lovely?

You will need to dry the salt dough out; there are a few options for doing this.

You can bake them for less time on a higher heat, but this may cause the dough to brown. And since we've gone to the effort of colouring the dough before baking, we really don't want to have to go back and paint over brown bits afterwards.

The third option is to just leave them out in the open air for a couple of days to dry out. This is better for the environment (and your electricity bill) but can backfire if you have nowhere sensible and flat to put them, and end up dropping a can of soup on them half-way through the second afternoon; once they have started to dry out you can't really smoosh them up and re-make them.

What I tend to do is put them in the oven on a low heat for an hour or so, and then take them out and put them on top of the fridge for the rest of the day. Sometimes I will take them off the baking sheet and line them up on a window ledge above a radiator to make sure they're really properly dried out.

Once they are dried out, you can do fun things like painting them with glitter glue and sticking things on, if you like.

And then, all that remains is to attach a ribbon, and hang them from your tree.

So there we have it. I would estimate the grand total cost of these decorations to be... no more than about £3. And that's allowing for buying full bags of flour and salt, and a new tub of paint. The ribbon is probably the most expensive thing, and if you have some of that kicking about the place already (let's face it, who doesn't have ribbon kicking about the place) then you're laughing.

I have saved you a fortune in cheap tat foil Christmas decorations that look awful and are terrible for the environment. Feel free to thank me in the comments.

Email ThisBlogThis!Share to TwitterShare to FacebookShare to Pinterest
Labels: Christmas, home made, tutorial