Since S was born, I've been thinking about going to church. Not because I'm terribly religious - I still have no real clue where I stand on the matter to be honest - but because I want her to feel part of a community, and to have the option of religion there for her if she chooses it. And because I think it might be good for me as well. 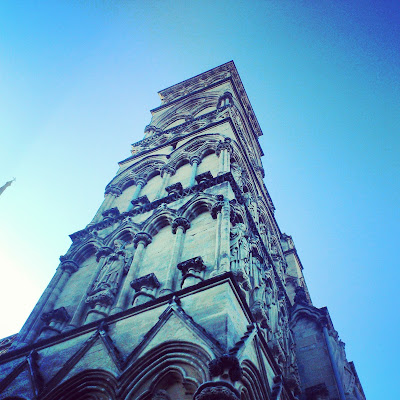 Before I returned to work, we attended a baby and toddler group run by one of the churches in town. It was great fun, and always had lots of ladies from the church who were happy to sit on the floor and play with toys while the mums got a cup of tea and some home made cake. At Christmas we went to their children's Christmas party in the church, and although S was only 8 months old and slept through most of it, I enjoyed it.The vicar made a point of coming up to chat to me because he'd not seen my face before, and every single person I met there was lovely. No judgement, no face-pulling, no cold-shoulder or cliquiness like you can find at a lot of parent/toddler groups. Since then, more than one person has recommended that particular church to me as being very inclusive and welcoming. Looking back, I remember seeing a family at the party that many might find odd, since the son had an interesting hair cut, an unusual (not "cool") name, and a father who wore makeup and dressed as a woman. Nobody batted an eyelid; they were there for the Christmas party, the same as everyone else.

This morning, as I was wandering about town with S out of sheer despair as to how to keep her from screaming at the top of her lungs, we bumped into a friend. I say friend; she's someone I barely know, but find I really get on with, and whenever we bump into each other we spend ages chattering while our children sit in their pushchairs whining to go home. Any way, I asked her what she was up to, and she said they were just on their way home from church. She said she wasn't really sure where she stood on the whole religion/church thing, but that she'd found a local church she really liked, and that really welcomed children. She mentioned that in this church, several of the pews had been removed to make a play area for children, so that the parents could sit around them and join in with the service while children sat in the middle and played with all sorts of wonderful toys in the middle. It wasn't cold or stuffy or unfriendly or judgemental, in fact children were encouraged to join the service and nobody minded them playing happily.

Guess what: it was the same church I'd been thinking about going to.

I tend to think that things happen for a reason, and that sometimes your life just pushes you in a certain direction. At the moment that's happening in two areas of my life; things just keep happening which seem to support a certain outcome. So I might just take S to church next Sunday.

Email ThisBlogThis!Share to TwitterShare to FacebookShare to Pinterest
Labels: religion