This week, we're on holidays. S's nursery closes for two weeks in the summer, and so I'm having an enforced two weeks off work.

I've been petrified for weeks. S has been at nursery for 3 months, and in that time they've kept her interested, engaged, occupied and happy for 8 hours every time she's there. I was terrified she'd be bored and fed up, stuck with me full time. Especially since last week she seemed to be really enjoying nursery, and got to the point of fetching her shoes from the front door half an hour before we needed to leave. 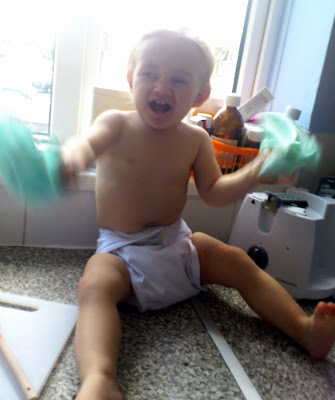 Monday was the first day of our holidays. This is what we did:


S had a smile on her face for most of the day, despite the fact she is teething like a good'un at the moment.

So our amazing achievement this week is: we spent 3 months at work and at nursery, and we didn't forget how to have fun together (with a little help from my sisters).

Email ThisBlogThis!Share to TwitterShare to FacebookShare to Pinterest
Labels: #SSAmazingAchievements, A, Z